- The Electricity of Vietnam (EVN) informed that the electricity output of Vietnam's power system in October 2022 reached 21.9 billion kWh and in 10 months of 2022 achieved 225.98 billion kWh, increasing 6.1% over the same period.

The structure of the electricity output is:

1/ The hydropower output reached 82.42 billion kWh occupied 36.5%, due to good water in the Central and Southern regions

In the first 10 months of 2022, the electricity output from the Power Generation Corporations reached 103.89 billion kWh, accounting for 45.97% of the whole power system. A notable point was the increasing prices of the fuels for electricity generation (coal, oil, and gas prices) leading to a very increase in EVN power generation costs and financing difficulties.

For the convenient plainness and utility program to electricity consumers, EVN deployed many reforms in supplying electricity services.

In 2022, EVN deployed national databases on the population for simplifying the domestic electrical services, and direct connecting electronic bills with the General Department of Taxation.

Until October 2022, the number of customers paying for electricity by non-cash reached 92.32%, and the rate of non-cash electricity payment for the whole EVN achieved 97.57%.

In digital transition, in two years 2021-2022, the EVN units completed 88.4 % of the target plan with high rates in some spheres as internal management with 99.3 %, business and customer service with 98.45%, and construction investment – with 96.6%. It expects to be basically finalized the central targets.

Due to digital solutions, in 2022, EVN was honored as an Excellent Digital Transition Enterprise and has received the “Vietnam Digital Award 2022”.

In October 2022, EVN also successfully organized the Festival of Competition 2022, contributing to improving professional and technical knowledge and professional practice, and building industrial style and discipline in direct labor staff at EVN units. There were 122 good workers achieving high results in the competition and were honored to be congratulated and praised by the President. 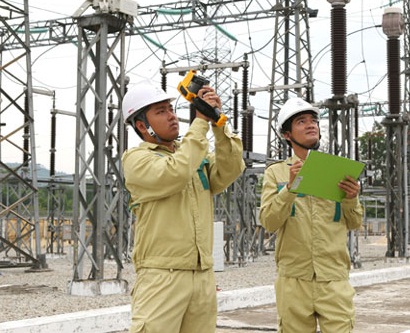 Approving the National Program on DSM