- Vietnam is one of the recognized renewable energy markets in the world, particularly in Southeast Asia region. It has a great potential to develop solar power, especially in its central and south regions. As the world is facing impacts of COVID-19 and the countries are bouncing back, the energy demand has been high like never before. Vietnam's energy demand is expected to grow by over 10 percent by the end of this year and by 8 percent per year in the next decade.

Amid such, solar energy is a savior for the country as there are investments in large-scale solar power projects. Sustainability, use of technology and growing environmental and climate concerns have placed Vietnam in a renewable energy landscape. Today, it has the largest installed capacity of solar panels in the whole region. Though it had set a target of 1 GW by 2020, it has already achieved 6 GW.

Amid such, Energy Box organized a webinar on 24th September to dwell more on the current scenario and ways to accelerate solar development in Vietnam. At least 12 experts and representatives from different organizations including investors and developers participated in the over two-hour long webinar and shared their views, comments, suggestions and recommendations

In her opening remarks, Dang Thu Thuy from Anheuser-Busch InBev, a leading brewer in world, informed that her company is operating in 5 different regions of Vietnam. It is also investing in talent pipeline of Vietnamese professionals. Being a part of a global campaign RE 100, she shared that the company is focused on smart agriculture, water stewardship, climate action and circular packaging among others. She added that the company is committed to reduce CO2 emissions and install rooftop solar panels in their sites by 2025.

Speaking in the webinar, Samresh Kumar, Chairman of skyX Solar said that they are focused on rooftop solar since last 20 years in operation in different sectors, and plan to develop few 100 MWs in next few years. 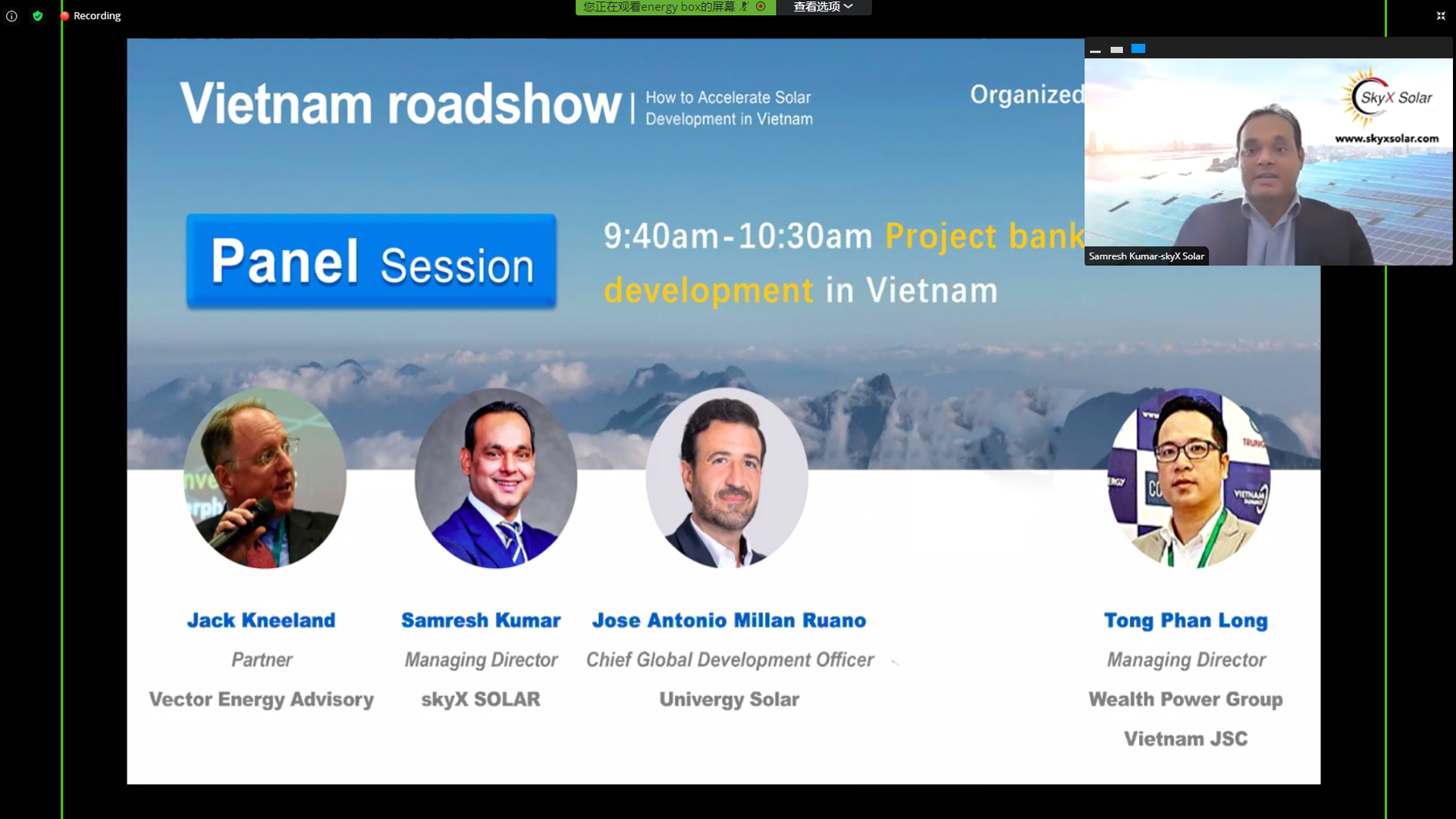 "In Vietnam, regulations are improving in a right direction. Its capacity has been increased to 1 GW in a year and has a potential of development of 18 GW by 2030," he remarked, adding that there are many advantages like no land requirement and licensing is much easier. He expressed hope that the solar energy industry will just accelerate.

In terms of company's plans, he shared that there is a pipeline of 200 MW projects as there is a huge demand from corporate sector with new industrial parks and factories setting up in Vietnam.

"The major challenge is threshold capacity, the Vietnamese government should increase it to break the barrier and to accelerate development, and there should be a clear regulation," Samresh Kumar recommended.

In his part, Jose Antonio Milan Ruano, Chief Global Development Officer at Univergy Solar, briefed about his company, which is in operation in 14 countries. Regarding Vietnam, they started the work in 2016 and have already developed 265 MW solar. "There is a huge potential in market," he remarked adding that they have been able to drive the market through real corporate PPAs. He further pointed out the need of competitive process of tenders for sub-contractors, subsidy for floating solar among others as it has real potential in South East Asia, particularly Vietnam.

Some photos of the Webinar: 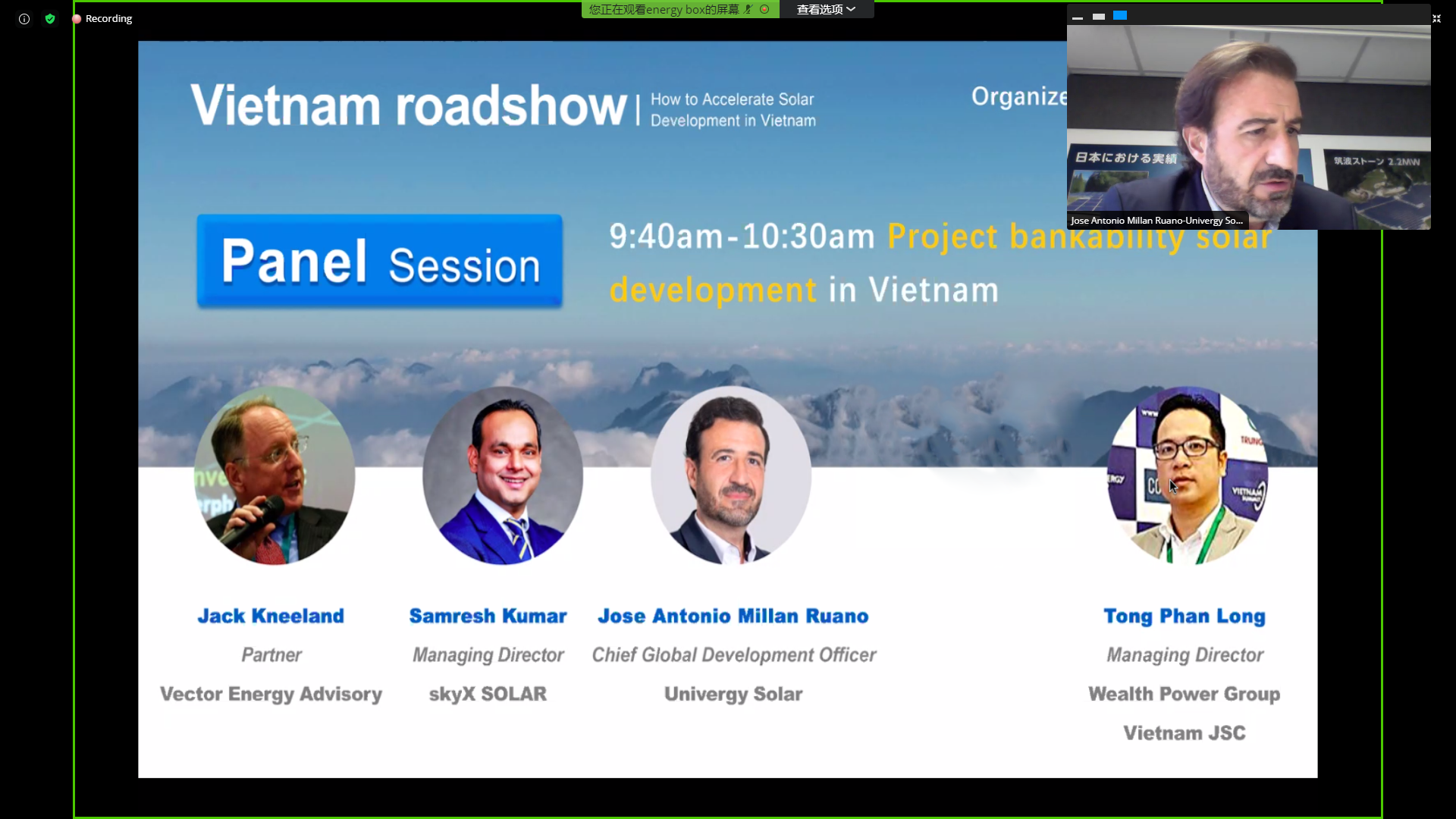 Tong Phan Long representing Wealth Power Group, appreciated the investment landscape in Vietnam, informing that they have biggest project of 4000 MW in central Vietnam, for which they have already signed the mandate with World Bank IFC. 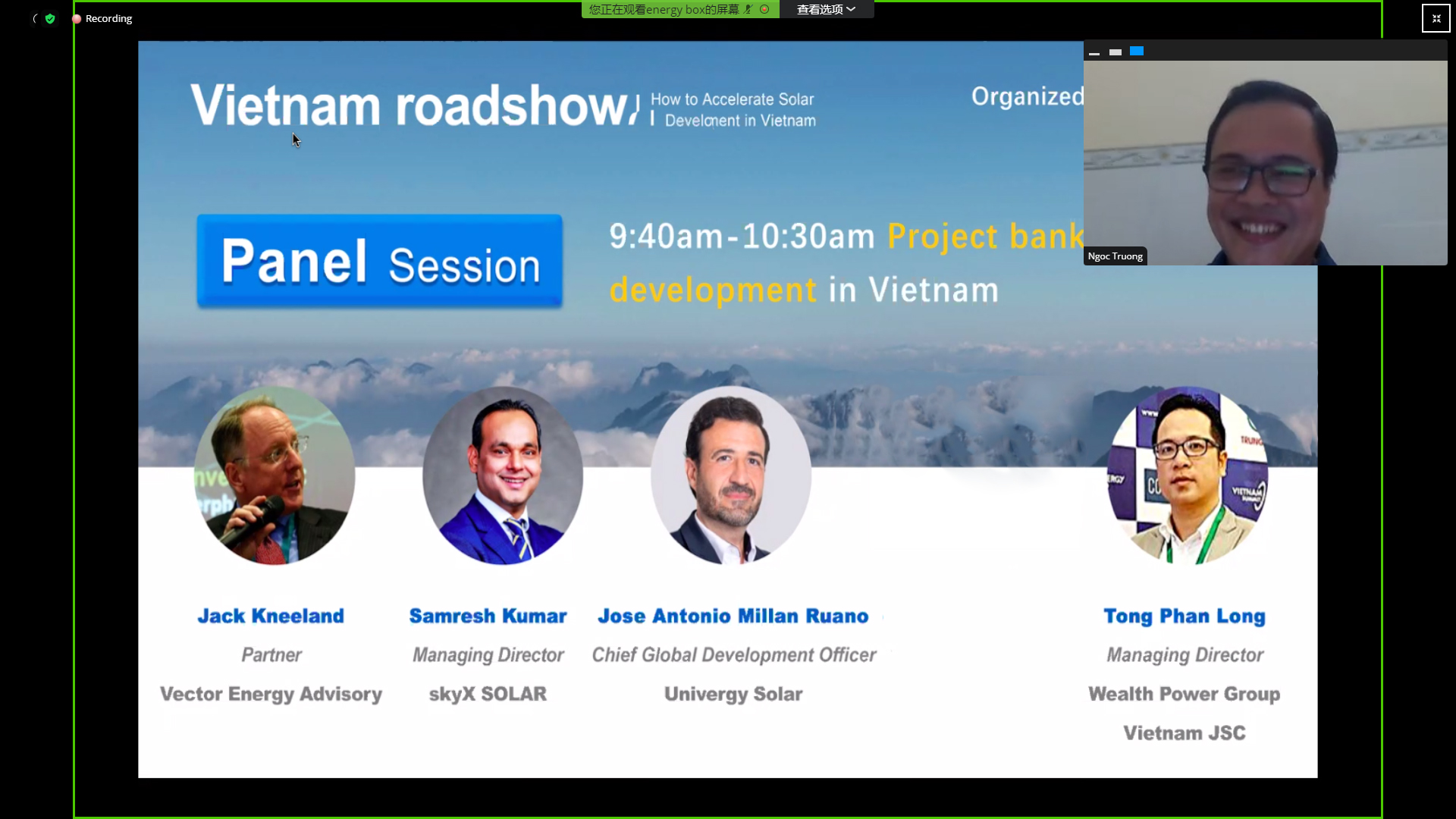 On his part, Wilson Cheng, Business Development Manager at, Trina Solar APAC briefed about the recently launched vertex modules and informed about the 600 W+ to be launched next year. As a global leading provider for PV module and smart energy solution, Trina Solar has been delivering PV products, applications and services to promote global sustainable development. The greater power output and efficiency of new solar modules can help to achieve a major shift to renewable energy in Vietnam, he expressed. 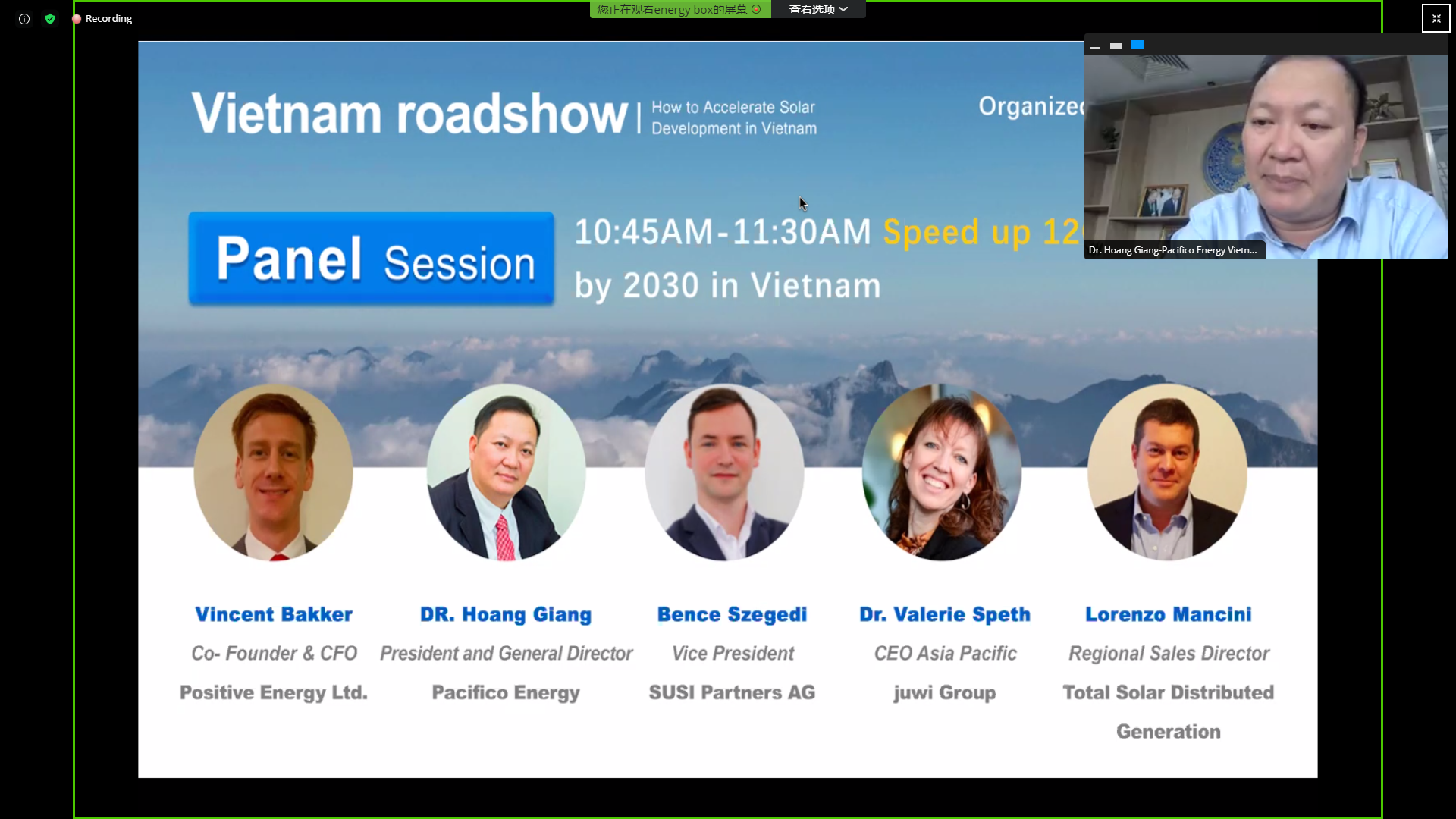 Dr Honag Giang from Pacifico Energy of Vietnam shared that they have a solar farm of 40 MW, operated from last June in Vietnam, which could be expand to 100 MW in future. "There will be a big shortage of energy in future and renewable energy is the key. Moreover, rooftop is the future for Vietnam, though talks are on wind and other energy forms," he shared.

He also briefed that the ministry is preparing to open for more opportunities for solar farms, by reducing the tariffs and promoting solar as a sustainable option as compared to hydro or coal. He expressed hope that 6 GW in next 10 years for Vietnam seems a bit low target, which can go up easily.

However, there are also some concerns from the investors that need to be addressed in order to increase investment in solar energy in Vietnam. 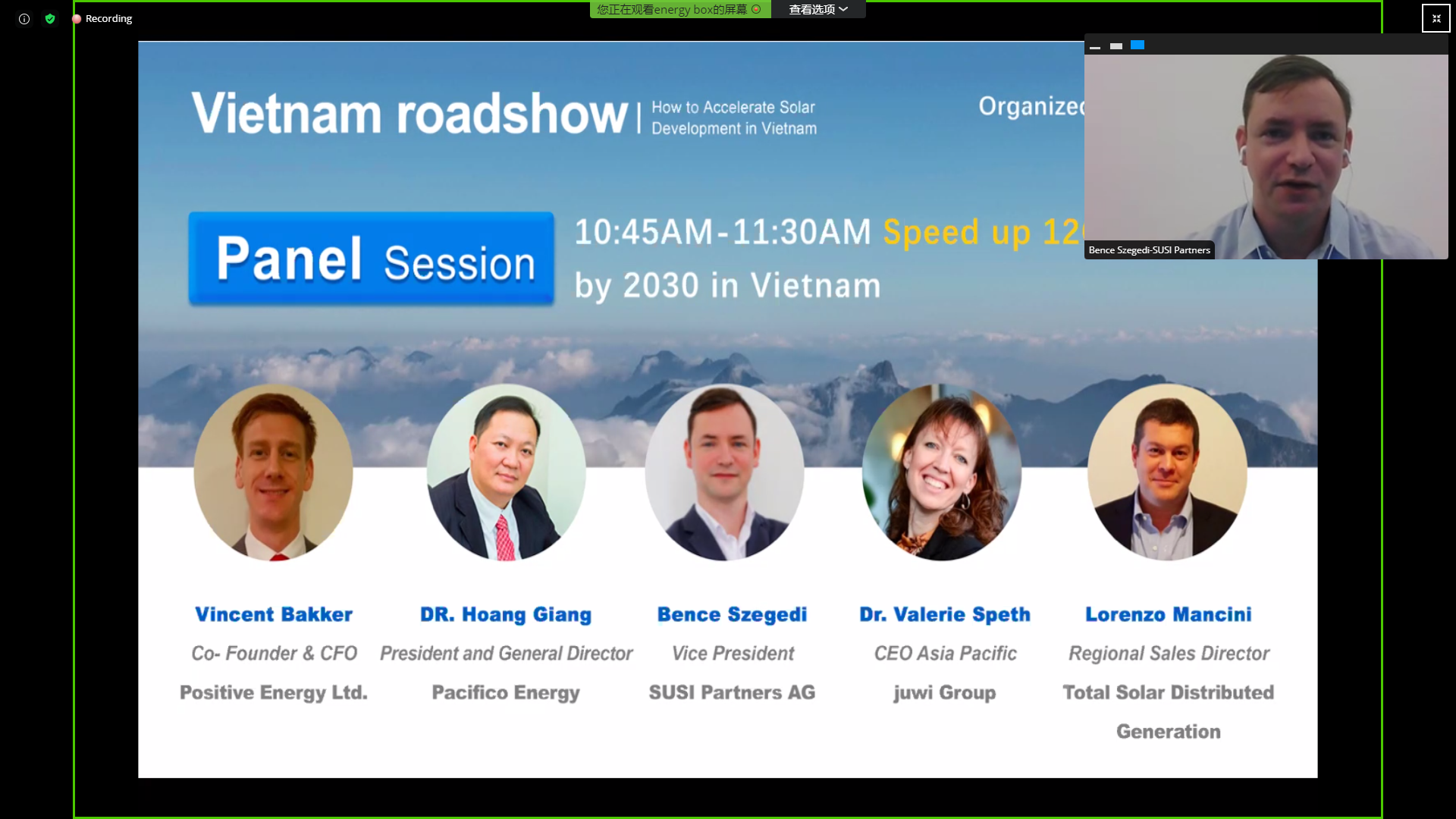 Bence Szegedi from SUSI Partners AG shared that they are looking for more opportunities in Vietnam, but there is a need of clarity of market for next years, upcoming schemes, auctions, bankable PPA among others. He also mentioned about curtailment, and stressed that good visibility of legislation is a key for putting more money in Vietnam. "Comforts should be provided to investors to unlock potentials," Bence recommended, adding that some adjustment is necessary in government schemes.

The Vietnamese government has launched the new solar feed-in-tariffs encouraging investment in renewable energy. The new tariffs are classified for ground-mounted, floating, and rooftop types. Since the government intends to double its power generation capacity over the next decade, many have pointed out the need of some adjustments and clarity and strategic planning. 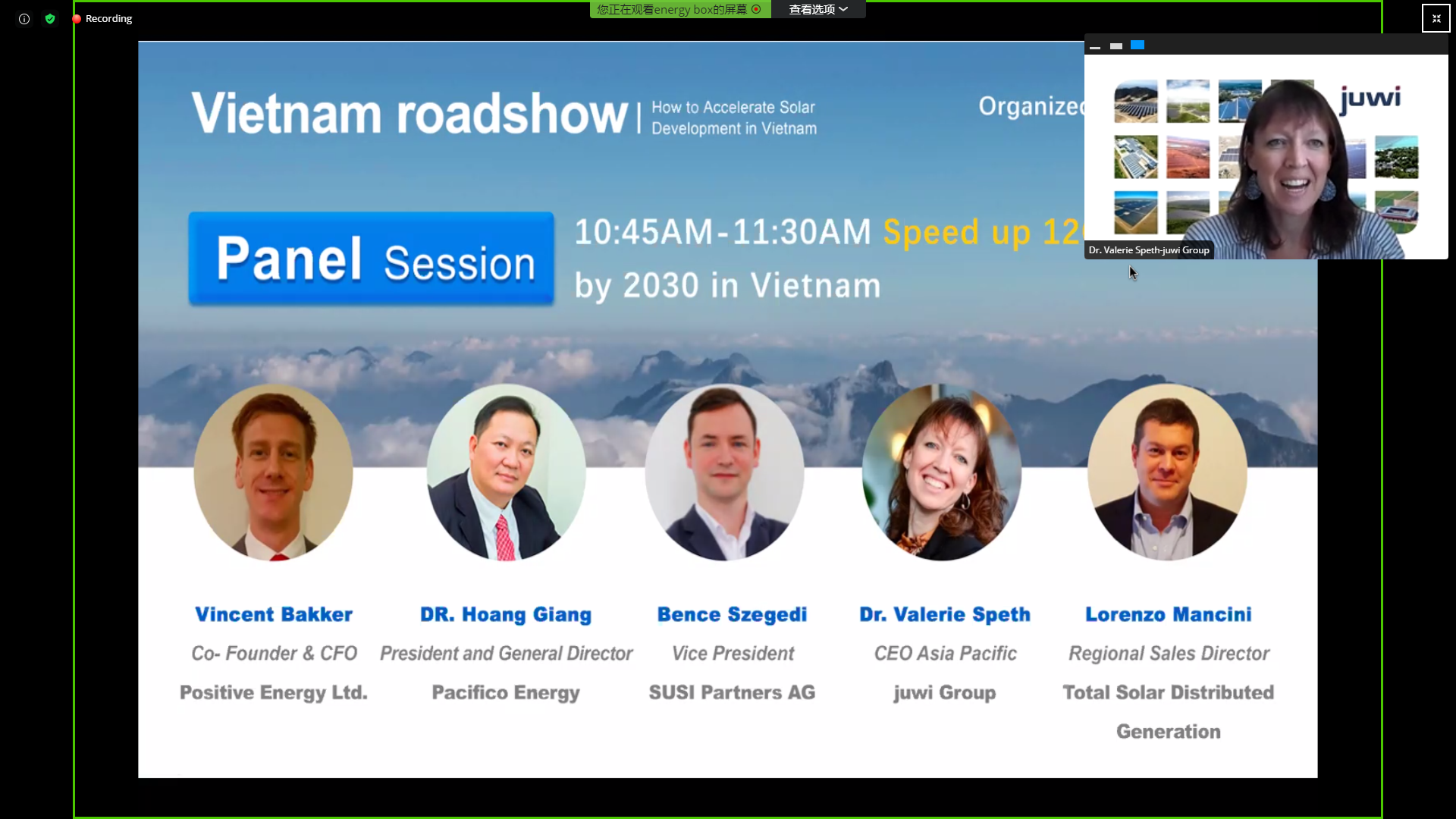 Echoing the same statement, Dr Valerie Speth, CEO of Asia Pacific, juwi Group, pointed out the need of regulatory framework while transferring the total energy system into renewable energy. She also briefed how a large scale project was achievable in Vietnam in cooperation with local partners.  Amid COVID-19, she informed how they achieved 130 MW in 9 months and appreciated the environment in Vietnam where you can always find a solution. "Some stable frameworks for longer time is needed to achieve the goal of 12 GW of Solar. Since the spirit of people in Vietnam is higher, even 22 GW can be achieved," She remarked. 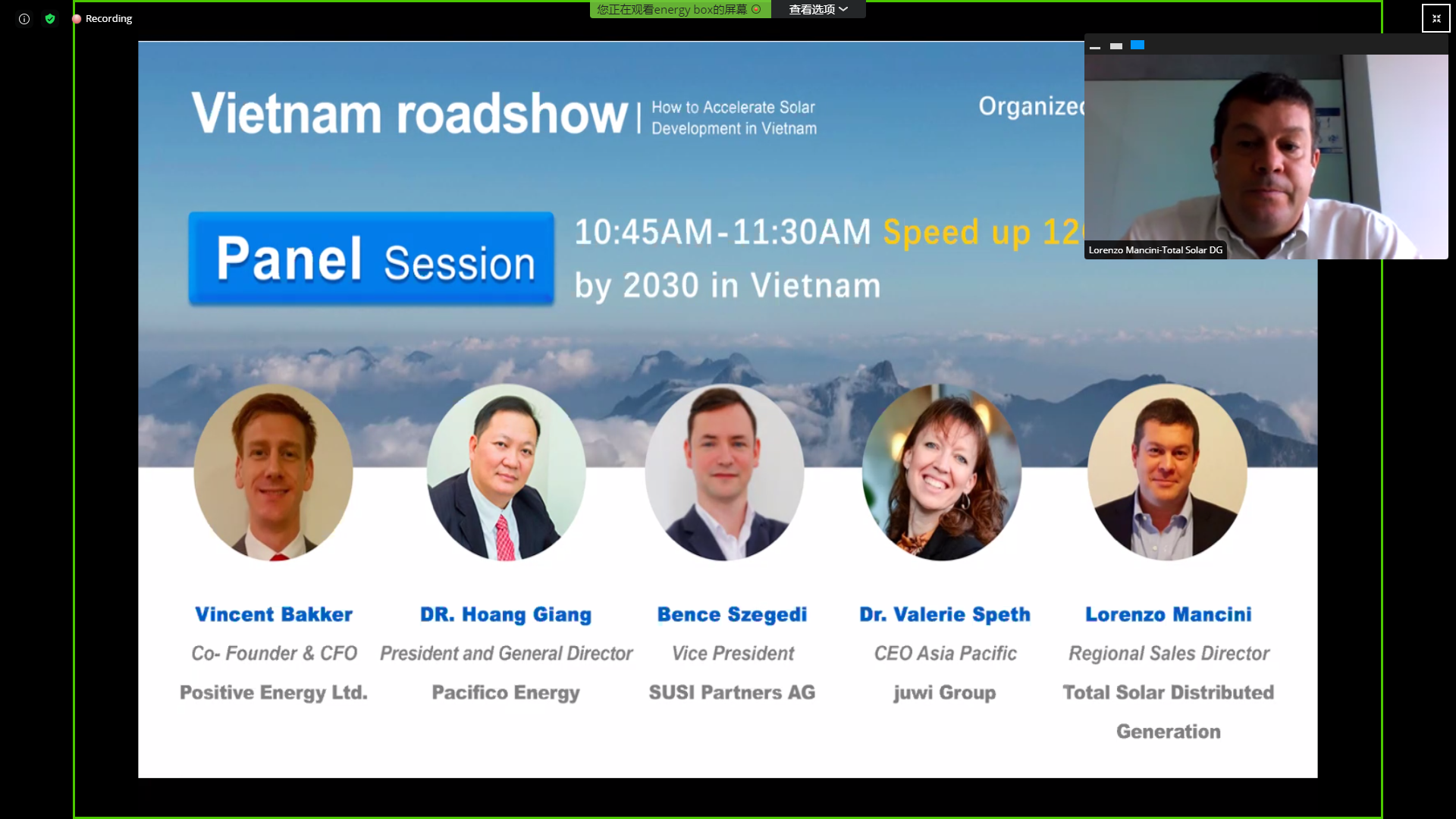 On his part, Lorenzo Mancini from Total Solar, shared that Vietnam is an important market, as its booming and the company is looking for several projects. As Vietnam has big advantage of rooftop, he informed that they are exploring some opportunities provided the long-term clarity.

Vietnam is regarded as a major solar player in the region which has attracted investors' interest in the renewable energy sector. However, according to experts and investors, it needs to have clear and supportive mechanisms to position self as a renewable leader in Southeast Asia.: